“I firmly believe that any man’s fi nest hour, the greatest fulfi llment of all that he holds dear, is that moment when he has worked his heart out in a good cause and lies exhausted on the fi eld of battle—victorious.” 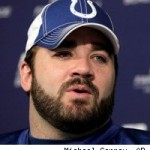 After our San Diego Chargers game in the playoff s to end the ’08 season, I wrote to Jeff Saturday a letter.  I said, “The man you have become and the testimony that flows out of your life are some of the strongest evidences of God’s power and love I have seen.”

We have “God moments.” All of us. For Jeff Saturday, as for me, one of those moments was facing off to the New England Patriots, just before the AFC Championship. Saturday confided in me “When I signed a big contract with the Colts in 2004, I began to believe I was special. I became greedy.”

But here’s what he learned very quickly: Success, you see, reveals deficiencies in your life.

In reality, when you’re in a position like Saturday told me, “There’s just something about this world that begs you to serve it.” And he learned that after the Colt’s Super Bowl victory. He said, “I suddenly realized how far I’d fallen. For the past two years, I’d been serving the world instead of God. When things are going that good, it’s so easy to just coast.”

This is true for anyone. When things are good, we tend to want to slack off, coast and serve ourselves. Deep down, however, what eats at us are the real deficiencies of our lives no matter how successful we are in the eyes of the world.

And this is a trap. Remember your jersey is a gift and you should use that to do exactly what my good friend Jeff tells us to do — serve people.